This was a 5K race that was scheduled for Saturday morning at 7:45AM.  In most other cities this early start on a late May morning would usually be rather cool and crisp, not Houston my friends!

The temp was probably in the low to mid 80's but the humidity was outrageous.  I was already sweating walking from the car to Minute Made Park! Training in this is going to make me so strong once the weather gets cool again in October.  Okay, onto the Race Report:

Annie and I got out of bed a little after 5am.  We had some coffee and a whole wheat bagel with peanut butter.  This has become our staple pre-race breakfast.  I let the pugs outside and could already feel the thick humidity when I opened the back door. Even the pugs didn't like it because they did their business and came right back inside.  My wife Annie has been running with our friend Elizabeth for the last few months.  Elizabeth just began running at this time so this was going to be her first official race.  Here husband Jim also decided to do the race. They are good people and it was fun to have running partners for the day.  They live a couple of houses from us so we all jumped in one car and made the 20 minute drive to Minute Made Park.

The organizers had booths set up outside the stadium for race day registration and packet pickup and they had the stadium open so racers could use the rest rooms indoors ... very cool!  Jim and I walked into the men's room and there appeared to be a long line but we came around the corner and at least 20 urinals were empty?  ohhhh this was the line to the stalls ...hehehe ... lots of race days nerves today folks!

We all did maybe a half mile warm-up run and went to line up at the start.  We ran into Diane from the Tri Club, she is very nice and it is always fun to catch up with her, and we all just stood around and talked  until it was go time.


Both Annie and Elizabeth were trying to run under 26 minutes.  They had both been talking about it for awhile now and they have put in the hours training so they were both ready.  They decided they would try to stay together for most of the race.  Annie had asked if I would be her Rabbit because she always pushes herself harder when she runs with me.  I agreed but we both knew this would be difficult for me since I tend to be an extremely competitive ass and once people start passing me the urge to run them down is pretty fierce.  So, when Annie put her Garmin 305 on and the battery died I knew she was going to need me now even more since she didn't have her pace watch.  So I promised to be the pacer and run an 8:20 mile pace so both the girls could follow and obtain the sub-26 minute goal.  I later found out Annie had text this to my mother and sister and they both thought I would not be able to handle the responsibility of being a pacer -- thanks for the vote of confidence guys!

The race begins and it is HOT.  I am talking Africa hot people!  We take off and I start out a little fast to try and find some open road for us to run and we have 2 hills on the out and hit them again on the back.  Over 3000 people were in the race so this was difficult but it did loosen up about a mile in.  Mile One was done in 8:15 and I could tell Annie was struggling a little. We held the pace for the next mile and it was done in 8:30 due to the two small rollers we had to run up.  At about the 2.5 mile mark Annie was starting to fall back a little and Elizabeth was holding firm right next to me.  With about 600 meters to go I told Elizabeth to give it a final kick and she took off -- she is speedy!  I slowed and waited for Annie who was about 25 yards back at this point.  I told her we needed to bust ass to make it under 26 minutes at this point and she dug down and picked up the pace. I was proud of her because she was definitely hurting and she hardened up and gave it a final kick.  At this point we entered the stadium and ran through the concrete service entrance and crossed the finish line which was located by the right field wall.

Annie finished with a time of 25:59, hitting her goal with one second to spare.  Elizabeth had an awesome first race and finished with at 25:47. They finished 11th and 12th, respectively, in their Age Group. They both did awesome and ran great in the Houston soup. My time was the same as Annie's.

Now the real fun began because they had a freaking spread for the post race party!  Beer, breakfast tacos, Pei Wei lettuce wraps, bananas, apples, popcorn, bagels, Powerade, coffee ... pretty much whatever the heck you wanted.  Jim came in a couple of minutes behind the girls and we all sat down on the first base line, we were all sweaty messes but so was everyone else so it didn't matter.  Very good race and one of the best post  race spreads I have ever seen ... especially for a 5K too!  After relaxing for a bit we all left and found a trendy little breakfast place in the Heights and ate like kings, again.  Overall it was a fun time and Annie set a new PR and hit her goal of going under 26 minutes and Elizabeth is hooked on running and was already talking about running a half marathon by the time we left the stadium. 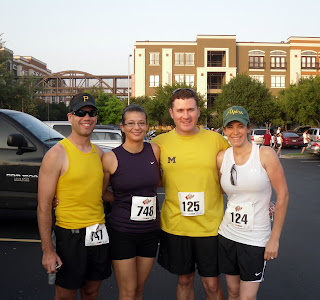 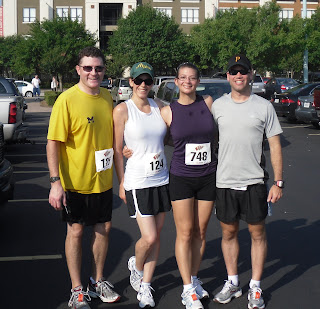 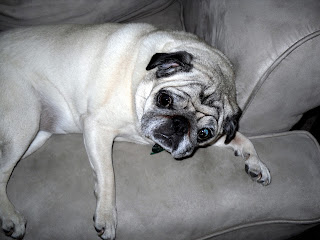 My baby girl Pug Bailey in the morning
Thanks for Reading,