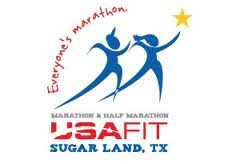 January 16, 2011 -  Yesterday Annie and I made the 45 mile drive south to Sugar Land for the USA Fit Half Marathon.  Annie has the Houston full marathon coming up in two weeks and I am in the middle of training for Ironman Texas.  We signed up for the race months ago and decided to just use it as our long run day for the week and to not really race.  One of us did well with this plan, give you one guess who did not!

When we left the house the weather forecast called for intermittent showers through out the day.  It wasn't raining at our house so we really didn't pay much concern to the weather.  Well, this was a mistake because by the time we got to Sugarland it was pouring and very windy.  The flags were all blowing straight out.  And the best part was that the temperature was about 10 degrees cooler than it was when we left our house at 4:45am - It would be nice to actually do a race with decent weather, just once!

We stayed warm in the car until about 6:40am and then started to make our way over to the starting corral for the 7am gun.  Well this didn't happen because traffic was still seriously backed up and they made an announcement that the race would start at 7:15.  We went back to the car to warm up.  We were frustrated because they had traffic problems last year when the race was half the size it is now and one would have thought they would have learned something?  This was not a parking issue, but an issue of poor logistical planning.

A few minutes later we see a few more people coming back our way and they tell us the race is now pushed back to 7:45 - wonderful.  We had both stretched and taken our EFS Liquid Shots and now we had to go to the car, yet again.  I took a 20 minute power nap and by this time both Annie and I had to pee.   We hit the porta-potty around 7:35 and as we were standing in line we heard the starting gun go off and the crowd cheer.  Everyone else in line jumped out and sprinted to the start.  Annie and I took advantage of the empty porta-potties and then made our way over to the start line.  By the time we crossed the timing mat 4.5 minutes had already passed.

This was a fair sized race with 1240 people starting the half and another 250 competing in the full marathon.  Annie and I started out together as their was nothing but gridlock in front of us.  My goal was to just hold about a 7:30/mi pace and keep my legs fresh for the upcoming training week. I figured a finishing time of 1:45-1:50 would accomplish this goal.  I spent the first two miles just zigging and zagging trying to get towards the front of the race.  The road is pretty narrow for the first couple of miles.  My splits were 7:52 and 7:45 for the first two miles.  I was not at all upset or agitated because I was the one who decided to start at the pack of the back and just slowly weaved my way past the herd to the front.  After about the 2nd mile I was able to find some open space and kick it in a little.

By mile 3 the rain was really coming down hard.  I was in just a long sleeve compression shirt and shorts.  I was soaked and still a little cold.  I decided to run a little faster just to warm myself up.  By mile 6 I was feeling warmer and my average pace over the 6 miles was right at 7:27/mi - perfect.  At this point I was executing my plan and my legs were feeling fantastic despite the fact I had already put in about 12 hours of training in the previous 5 days.

For some reason I looked down at my garmin and I was holding a 6:45/mi pace and I was feeling very comfortable.  I decided to just keep it there and slow down when my legs told me it was time to slow down.  Well this never happened.  I hit the 10 mile mark and for some reason decided to hammer the last 3.1 miles.  Mile 11 came and went and that split was a 6:12. Similar split for mile 12 and then I could see the finish line and really kicked it in and passed probably 6 or 7 people in the final half mile.

I crossed the finish line with a time of 1:34:09.   The split for the last 5k was 19:50 and I felt surprisingly fresh?  Good news is that even though I went a lot a little harder than I wanted my legs feel good today.  Annie and I went for a swim in the cool LTF pool after the race and I think that really helped with recovery.


This was a PR for me at the Half Marathon distance by 8 minutes.  The previous PR was in Austin which is considerably more hilly.  I have dropped sub-1:40 times over 13.1 miles during training so I was not at all surprised by this result.  In fact, if I would have started towards the front of the race I am pretty confident I could have picked up a couple more minutes based on the fact I negative split the entire run after mile two.   After this race I am confident I have a sub-1:30 Half in me!

One of the cool things about starting at the very end of the herd was that I literally passed 99% of the field.  This was awesome because I cannot even count the number of encouraging words passed between other runners and myself.  Despite the fact it was cold, rainy, and windy I had a smile on my face the entire race because of the other runners.

Annie did very well.  She finished in 2:04:xx and passed a bunch of runners coming down the finisher's shoot.  This was about 9 minutes off of her best 1/2 but since she is in taper for the marathon she was just trying to keep her legs fresh.

One more side note:  If any of you question the technique of doing the vast majority of your training runs in your aerobic zone go look at my BT.com logs.  For the last 2 months the only time I have run below an 8min/mi pace (my Zone 2 is 8:15-8:45) in training was during my very limited fartlek and speed interval workouts.  Running slow to run fast maybe boring but it really works.