I know this is a Triathlon Blog but my mind and body is pretty wore down with training so I want to talk about something else.  So ...
Regina over @Chiu On This had a funny cartoon from the NYT about about "running" but it was actually talking about running for President in 2012.   This cartoon got me thinking about 2012 and who I'd like to see as the GOP candidate. Right now I am not real excited about the current pool of has-been's and never-will-be's that seem to be in the forefront. 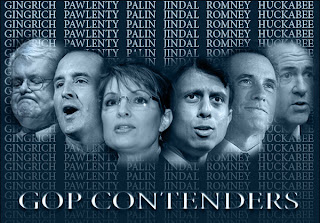 Here are a list of "prospective" candidates:
-  Mitt Romney, Former Massachusetts Gov, the front-runner, largely because he was the runner-up to Sen. John McCain in 2008.
-  Sarah Palin, Former Alaska Gov, who has recently made a name for herself by endorsing winning Tea Party candidates.
-  Haley Barbour, Current Mississippi Gov, a social conservative in his second term.
-  Mitch Daniels, Current Indiana Gov, a fiscal conservative in his second term.
- Mike Huckabee, a Fox host and former 2008 presidential candidate.
- Newt Gingrich, Former House Speaker.
-  John Thune, South Dakota Sen, a conservative and darling of the party for defeating former Senate Majority Leader Tom Daschle in 2004.
-  Chris Christie, Current New Jersey Gov, whose budget cutting in his first year has impressed many in GOP ranks who want him to apply his touch to Washington.
-  Tim Pawlenty, Minnesota Gov, already running and showing his conservative side.
-  Bobby Jindal, LA Gov, probably running and gained some points in his handling of the BP Oil Spill.
-  Rounding out the list are Donald Trump, Jeb Bush, and Ron Paul.
We will see a few more candidates pop up in the upcoming months but for now for the purpose of this post, this is the assumed list.
Personally, the only candidate on this list who I am remotely excited about would be New Jersey Gov Chris Christie. He would absolutely destroy Obama in a debate and he would hold his ground in cutting reckless spending from the Federal Government.  However, he claims he is not running?
I like Jindal,  Pawlenty, Daniels, and Thune in their current positions but, IMO, none of them have the ability or charisma to articulate the Conservative message to the country.  This is probably the most important attribute a candidate needs to have because the GOP is pretty split right now.  The current establishment of Republicans want to see the party capture more Independent voters by leaning more towards the center of the political spectrum.  The Tea Party segment wants to see the country get back to the principles of the founding fathers and limit Government intrusion and taxation which is perceived as leaning to the right.
My feelings are that we need a candidate that can pull together both factions of the party and also explain to the undecided voter why the country needs the fundamental changes away from the policies of the Obama administration. Hopefully a candidate exists that can achieve this lofty goal.
So my questions are who do you want to see run for President in 2012?  Am I missing some one?  Or is someone on the list a better candidate than I think?  What says you ...
Thanks for Reading,
Jeff
Written by Unknown at Friday, March 18, 2011

Email ThisBlogThis!Share to TwitterShare to FacebookShare to Pinterest
Labels: 2012 Candidates