Running is a painful and crazy endeavor.

It hurts, sometimes hurts real bad, but yet we still do it?

It has been many a race when the extreme pain has set in and that voice in my head would start screaming  to stop and debate with me over the very reasons as to why I was doing this to myself.

On Saturday this voice was as loud and persistent as it has ever been, actually deafening, I almost gave in to it's demands - almost.

And when I crossed the finish line and achieved my goal it was at that very moment that the intense pain was replaced by extreme joy and the question of why became irrelevant.

Once in the medical tent that joy went away rather quick ...

Kevin and Jennie made the trip to the Country of Texas for the Woodlands Marathon. Jennie would be running her first half (she did amazing) and Kevin and I would be trying to Boston Qualify. He is younger then me so he needed to be sub-3:05 and I needed a sub-3:10.

With the Boston Athletic Association enacting new qualifying standards this year both Kevin and I had to be 5 minutes and 59 seconds faster than those who qualified last season. Yes, our timing sucks but we were Ironman training last year so we played the cards that we were dealt.

Kevin and Jennie arrived in town on Wednesday evening and the weather was rather hot and humid. However, according to all the forecasts a cold front would be moving through and make race morning comfortable. We got lucky as this is the first time in recent memory that a weather forecast has actually been correct! Race morning the temps were in the high 40's and humidity was non-existent. The only hiccup was some strong, cold winds coming out of the North.

We spent the couple days before the race hanging out and introducing Kevin and Jennie to all the goodness that is Texas. They are awesome people and we all had such a great time with them! Both Annie and I cannot wait to do it all again in Quebec later this year.  I will let them tell you about the trip on their blogs but we all had a blast!

We also had another special guest in for the big race - fellow Texan and friend -  Jason of Cook Train Eat Race Fame, made the long drive down on Friday afternoon to be part of the support crew. It was great to have Jason there before the race as he is always so laid back and keeps us all laughing instead of worrying about the race. Thanks buddy, your support meant a lot!

We had a crew of friends running in this inaugural 26.2 and 13.1 miles races in the Woodlands:

The Elite Race went off at 6:45am sharp. Kevin and I were in Corral A and were lined up right behind the 3:00 Hour Pace Group. We were sent off two quick minutes behind the Elites at 6:47am. Race On!


Our goal was to keep the 3hr pace group in sight and try and hit the halfway point right around 1hr and 30mins. This would equate to a 6:52 per mile average for the first 13.1mi. Everything was going perfect as Kevin and I were running shoulder-to-should just clicking off the miles. The course was flat and fast and on the first loop we were able to tuck in behind the pace group when we headed North into the wind.

The pace was fast and uncomfortable but we had both trained for this and we hit the halfway mark right on schedule:


Kevin and I maintained our 6:50ish pace until mile 17 and that was the last time I would see sub-7 splits on the garmin. The 3hr pace group was no longer in site. Actually we were pretty much alone at this point picking off the occasional slower runner from the Half Marathon Race that started 10 minutes after the marathon.

By the time we hit mile 21 things started to hurt and hurt bad. The water stations were 1.5mi apart and Kevin and I separated a few times over this part of the course but eventually he caught back up to me around mile 22. We may have talked but my memory is a little hazy from this point. I know I was looking at the garmin and trying to figure out what type of pace we needed to maintain but math was not working so well.

We ran together for the next 2 miles and began to catch up to a lot of the half marathoners. In fact, it was getting difficult serving around them as lateral movement was not so easy. Mile 24 was my worst with a split of 7:42 but I got a boost when Kevin dug deep and made a push. He started to pull away and I was cheering for him with all my heart to get in under 3:05.

By mile 25 I was still moving and my vision had started to get blurry and tunnel and white circles were appearing before my eyes. I was actually thinking I might pass out and just kept telling myself to keep moving. Each step hurt more than the last and my body was pleading with me to walk. The 7:39 pace of mile 25 was the longest mile of my life. My entire body hurt and when I finally saw the turnoff to the finish line I damn near broke into tears. These pictures coming down the chute tell the story:

I hit the finish line and Kevin was there to catch me - and I needed to be caught! He informed me that he finished in 3:05:12 and missed the BQ by a mere 12 seconds. Broke. My. Heart.

It was hard to be disappointed because he just set a marathon PR by over 15 minutes with that 3:05 but he deserved that stupid BQ!

We were both in severe pain when Kevin made his move at mile 24. If he would have just hung back and been happy finishing it still would have been a heck of a race for him. He gave everything he had and I could see it in his eyes that it hurt like hell. He left it ALL on the course. The race he ran took skill and determination. The last 2.2 miles of the race was nothing but sheer guts. I averaged a 7:35 pace over the last 2.2mi when we split and he picked up 1 minute and 13 seconds in that span - THAT is the definition of Badass!

I am a firm believer that in life we are presented with few opportunities in which our true character is given the full chance to shine. Those last 2.2mi on Saturday I was able to see Kevin's character shine and am proud to have run this race with him and even more proud to be his friend. You killed it dude!


I was a wreck. Kevin walked me to a golf cart and the next thing I remember is sitting in the medical tent telling a Doctor he looked blurry. It was cold and he was thinking I may have had too much fluid (Hyper-something, Jason knows the word). Anyway, they made me stay for about a half hour until I felt better. I really didn't feel better but was sick and tired of being in the medical tent. Best part is I was lying on a cot and speaking with a women about how I felt as she was asking me question after question. I opened my eyes and it was Annie asking the questions. I did feel better after seeing her.

After the med tent I took a leak and this is when I realized that I was in bad shape as my urine was filled with blood. Not good times.

We found everyone and got some food in me and I started to come around.

**Edit: All is good now and I'm back to having nice, clean pee!

Thank you to Annie and Jason for being the world's best race sherpas and photogs! And how awesome is my wife to be sitting in a medical tent with me and not be freaking out at all? Most spouses would be wagging the finger saying this is was your last race!

Congrats to Jennie for killing her first half marathon, to Jen for setting a new half PR, to Elizabeth for running a 1:50 a few short months after baby #2, to Bobby for completing his 10th marathon, and to my good buddy Dave for getting like a 45min PR with a 3:23 Marathon!

The hard work you all put in inspires me each and every day! 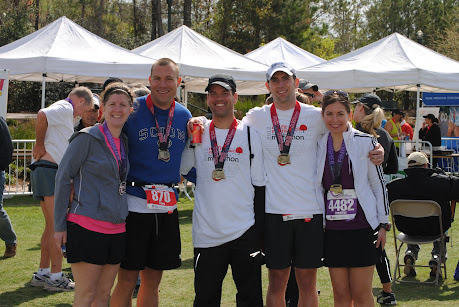 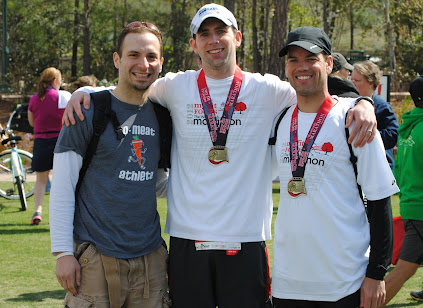 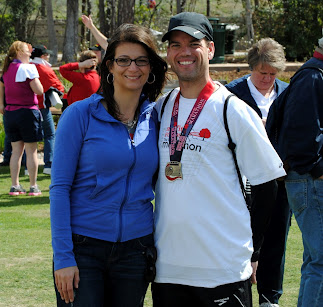 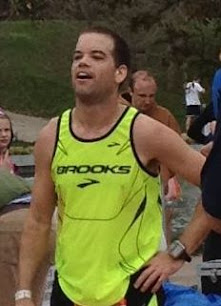