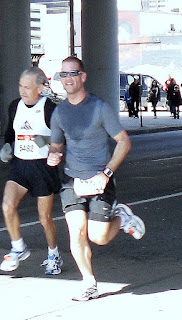 This was my 4th running race of 2010 already.  It was the ConocoPhillips Rodeo Run 10K.  Every year Houston hosts the largest Rodeo in the country.  Literally millions of people come to enjoy concerts, BBQ, games and off course, rodeo.  This is the race that kicks off the festivities and it is followed by a parade. Over 12,500 racers participated in the 10K and 5K fun run. To the right is a picture that Annie snapped about a .5 mile before the finish.  Even though it was only about 45 degree you can see from my shirt that I was working hard ... passing an elderly dude!
This race was slated to begin at 9:30am, which is a welcomed later start time giving it a chance to warm up.  Once the sun came up over the city skyline it really helped with the otherwise chilly morning.  In the past I have moaned about people slotting themselves at the wrong pace markers.  With over 12,000 racers I figured this would be a problem again so I lined up at the 5:30/mi pace marker (yes, I am aware of the hypocrisy of slotting myself wrong..hehe).  I was probably about 40 yards from the starting line and as I looked around (runner stereotyping - we all do it - leave me alone!) noticed that probably 90% of the people were once again slotted incorrect.  With the shear volume of people in the streets it would be impossible to even attempt to move up.  We were packed like sardines!


The gun goes off and it takes about 45 seconds to get to the starting line.  From here I put my head (and shoulder) down and take off.  Yes, I clipped and side-swiped a couple of people and make no apologies for doing this - tough love - maybe next time you will start were you are suppose to!  I was not alone either because some very fast world-class runners were in this race.


My first two miles were done at 6:46 and 6:44 respectively.  This is about 15-20 seconds faster than I am accustomed but I was still feeling pretty good.  Then as mile 3 began the course took us to an overpass of Hwy 59.  This thing was long and steep.  The uphill portion lasted about a .5 mile.  The down hill was much more gradual because it took us to another uphill.  This wasn't as bad but was still pretty steep.  It really slowed my pace as mile 3 was 7:15.   My 5K split was 20:50, so this is moving for me!
Then at about the 3.5 mile mark my stomach started to cramp - bad.  Not side stitch cramping - GI cramping!  Really I cannot think of a reason why this happened?  I was well hydrated and my nutrition was the same as it has always been.  But it was so uncomfortable that at the mile 4 water station I actually stopped and dry heaved over a garbage can - nothing came up.  However, I did garner some very disgusted looks from the teenage-aged volunteers manning the water station - so I had that going for me!  At this point I figured it was only about 2 miles to go and I could HTFU and just finish.  Without getting all gross and descriptive on you - since the vomiting didn't work - lots of "clinching" was done for the last 2 miles!
Mile 4 split was 7:53 (stopping didn't help!).  Mile 5 was 7:59.  Mile 6 was 7:41.  The final .21 was at a 6:16 pace.  For some reason the pain subsided some with about a mile to go and I was able to get a nice kick to finish strong.  Hello finish line and hello port-a-potty.
My final time was 45:37 this is a 7:20 average pace and was a new personal record surpassing the 46:20 that I did in 2009.  Even though it is a PR I am a little disappointed in my results. I really think if my stomach would have cooperated I could have done this in 44:00 - 44:30.  Heck, I wasted 30 seconds dry heeving.  But, this is a good learning experience because it shows that things do not always go as planned and you need to sometimes suck it up and make decisions on the course.
Overall, this was a very well done race. The post race party had a ton of things to do.  My friends came and brought their kids and they had a bunch of games for them to play.  Sponsors had tons of drinks and fruit and bagels.  Just really well put together event.
Here are my final stats:
Chip Time:  45:37
Overall Rank:  333/5520 (top 5%)
Gender Rank: 280/2818 (top 10%)
Age Group Rank:  44/478 (top 9%)

Would love to see my time with this guy running behind me! 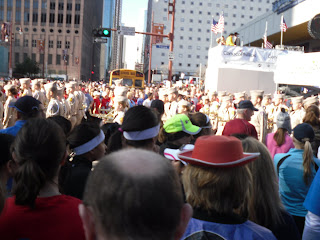 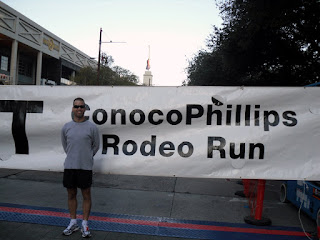 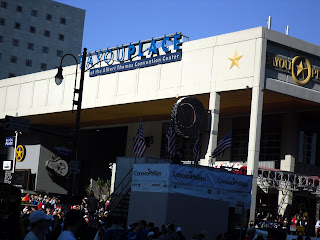 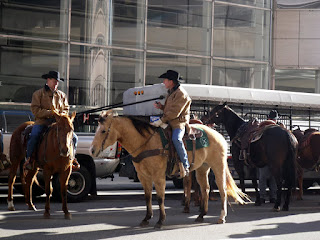 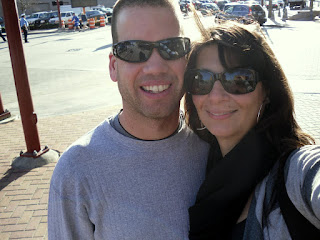 Annie and I pre-race.  My "toss" sweatshirt. 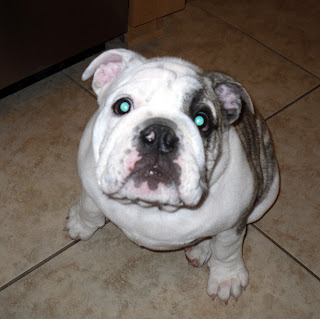 This is George (aka - Tater). We are dog sitting him this weekend!
Thanks for Reading,
Jeff
Written by Unknown at Sunday, February 28, 2010